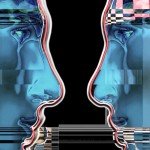 According to various news outlets over the last day or so (see, for example, The Register), a team of programmers have crafted a chat bot that is able to pass the famous Turing Test. I think I probably wouldn’t give this a true “pass” mark, though it is an important development. In my understanding of […]

It’s traditional to launch a new effort with a Hello World! I’m thinking there’s not seven billion people reading this post. So (“so”!) what’s the plan? There isn’t much of one, really, except to say that I have some things to write down that are more involved than a quick post on Facebook or Twitter. […]